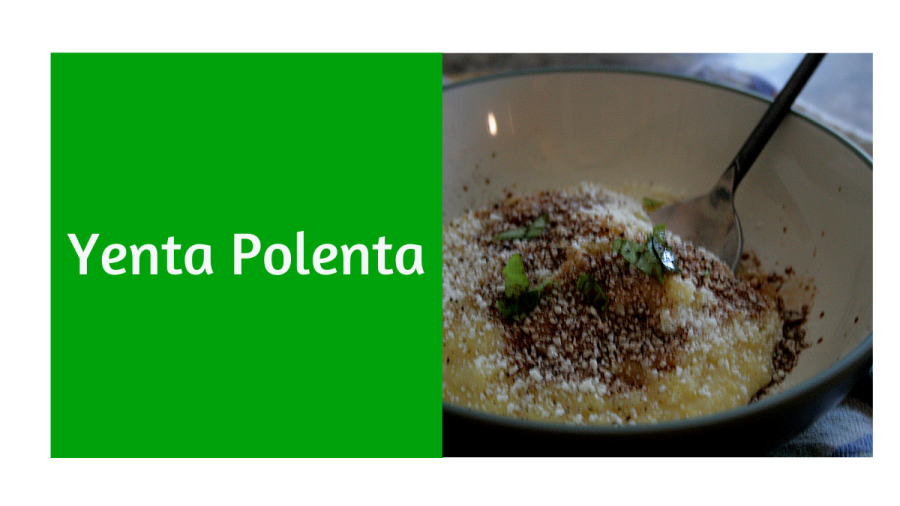 I know my would-be in-laws mostly through dear, sweet husband’s stories. One such story came to light when I was fussing at him for some thing or other. It was so unimportant I can’t recall what it was, but I remember he interrupted me by stating “yenta calaventa.” It stopped me in my tracks as I attempted to understand what was meant by this part-Yiddish, part-Spanish sort of utterance.

“What?” I asked him, my look clearly indicating I needed more information. He grinned, “It’s something my Dad used to call my Mom when she fussed at him.” I smiled. “And what does it mean, exactly?” His response: “I’m not sure.” My reply? “Ok.” I suppose we moved on to resolve the issue. (And the first time was definitely not the last time I heard it. I might hear it tomorrow … you never know.)

I did some research, and here is what I learned:

I suppose I should be insulted he called me a Yenta calaventa, but hey—it’s family tradition!

When I decided to explore polenta, the yenta rhyme was too much for this poet to resist, therefore … yenta polenta. (Make it a gift for Day of the Dead and you’ve got a yenta polenta calaventa.)

Polenta has a long history. Once upon a time it was made with various grains; however, today, it’s mostly made with corn meal. So after it’s all boiled down, one yenta’s polenta is another’s grits.

Being a child with southern heritage, I grew up eating grits on occasion, but I became acquainted with polenta later in life. You can buy a package labeled polenta, but I simply use corn meal. It’s important not to use corn meal that’s “instant rise” because that version has leavening agents.  A plain, medium grain meal will do fine. My secret recipe includes a bit of southern flair—I use some white grits in addition to yellow corn meal.

Polenta is pretty quick and easy to make, and the recipe can be scaled up or down.  It’s vegetarian, but can become vegan by subbing butter with olive oil. You can add salt or not as may be needed for dietary restrictions. Want meat? Add meat as a topping, like Italian sausage. Or keep it vegan with a plant-based substitute. This version calls for a cheese topping. Perhaps I should have called it ”Polenta Formaggio.” Doesn’t that sound so fancy—romantic, even—compared to ”cheese grits”?

I like polenta with portobello mushrooms and spinach in a garlic sauce, but this simple version is appealing, topped with cheese and a few extras. For dear, sweet husband I sprinkled a good amount of Parmesan cheese and added some red pepper flakes and fresh basil. For me, I sprinkled cotija cheese and added fresh ground black pepper, basil leaves and balsamic vinegar. Delicious. The leek and spinach filling for my Leek & Spinach Stuffed Bread would also make an interesting topping.

If you haven’t tried making polenta before, give it a go! If you’re pressed for time you can have a scratch-made dinner ready in about 30 minutes.

“But beyond the extravagance of Rome’s wealthiest citizens and flamboyant gourmands, a more restrained cuisine emerged for the masses: breads baked with emmer wheat; polenta made from ground barley; cheese, fresh and aged, made from the milk of cows and sheep; pork sausages and cured meats; vegetables grown in the fertile soil along the Tiber. In these staples, more than the spice-rubbed game and wine-soaked feasts of Apicius and his ilk, we see the earliest signs of Italian cuisine taking shape.”

Prep time:  about 25 – 40 minutes, depending upon desired thickness

2 TBSP butter (unsalted or salted, according to preference)

Bring the water to a boil in a deep saucepan.

Gradually whisk in the meal and grits and reduce the heat to low, stirring frequently, until the polenta thickens, about 15 minutes. (You can keep on low heat longer for a thicker consistency, just stir frequently to avoid sticking and burning.)

Remove from heat, and stir in butter.

Serve as a side for an Italian meal, with a salad or as a stand-alone meal topped with cheese, vegetables, meat or a combination. Sprinkle or drizzle desired seasonings and garnish with fresh herbs. 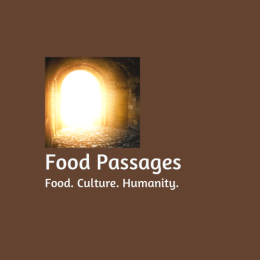