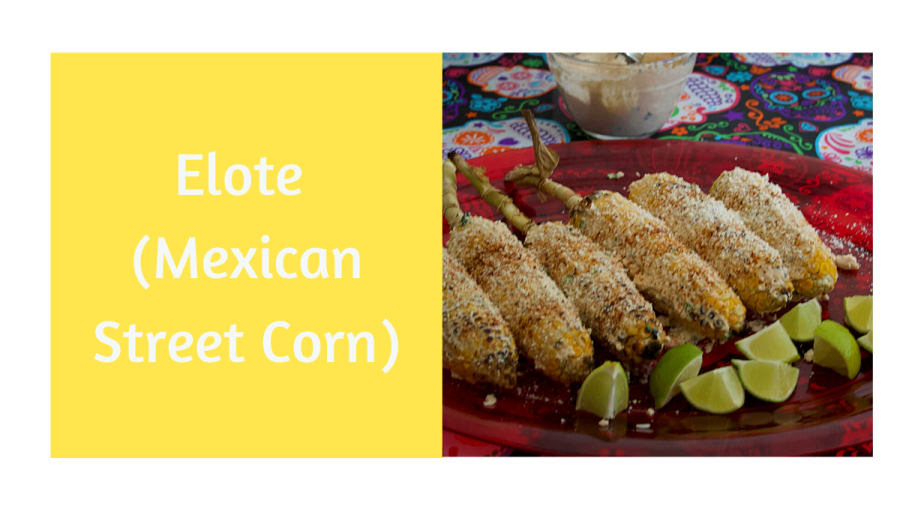 Today is the first anniversary of Food Passages! Thank you to everyone who has joined me in this journey … I appreciate each and every one of you, and I hope that you have enjoyed at least a few of my posts! When I started this blog, I knew the rules for a successful blog—have a plan, a year’s worth of posts written, a well-defined target audience, etc.— but I broke them all, and started with an idea and a single post and an amorphous target audience. I decided I’d give it a year and see how things went.

Today, I have a “to do” list that keeps growing and a continuing desire to share stories and recipes with you. Thanks again for following me, and I hope you’ll stay with me as we roll through year two! Here’s to more fun, food, and followers in the year to come!

Mexican Street Corn has been on my “to blog” list for as long as I’ve had this  blog—so when my middle stepchild said she wanted a Mexican cookout for her graduation dinner, I was psyched about it. I’d finally get around to making that authentic street-style corn as part of the meal.

I normally make what I’ll call “suburban” elote most of the time … because I skip the crema and mayonnaise part of the sauce. I just don’t need the cholesterol and calories. And since we tend to grill fresh ears of locally grown corn all summer, those sweet juicy kernels are a treat unto themselves, so I don’t miss the extras. Seriously, what’s better than fresh sweet corn? (Ok … it’s Mexican Street Corn.)

Mexican Street Corn is definitely worth a diet cheat every now and again. It’s easy to make and tastes fantastic. Most ears of the corn we used still had a bit of stalk left that we used as ”handles” for the finished corn, which felt more natural than stabbing the corn with metal prongs of a corn holder. You can eliminate handling the cob altogether by removing the kernels from the corn and mixing the sauce in it. Speaking of the sauce, you can scale back the sauce recipe for smaller quantities of corn, as I had plenty left over after making 6 ears. You could cover a dozen comfortably.

You can make a vegan version of this vegetarian dish with nondairy substitutions for the mayonnaise, crema and cheese … or make my “suburban” version, which uses only the spices and lime juice. For a lower sodium version, eliminate the salt and reduce or eliminate the cheese.

Papi’s Pollo Loco was the centerpiece of our celebration meal, but Elote was front and center among a spread of sides and condiments that included red and green salsas, salads, guacamole and more. Patio entertaining met family gathering to create a beautiful evening that lasted well past sundown on the deck. It was as sweet as our Mexican Street Corn.

“There is a time in every man’s education when he arrives at the conviction that envy is ignorance; that imitation is suicide; that he must take himself for better, for worse, as his portion; that though the wide universe is full of good, no kernel of nourishing corn can come to him but through his toil bestowed on that plot of ground which is given to him to till. The power which resides in him is new in nature, and none but he knows what that is which he can do, nor does he know until he has tried.”

1/2 C Olive oil (or other) Mayonnaise

Remove husks and silk from corn.

Brush with oil and sprinkle salt and pepper on corn. Set aside.

Mix together seasonings in a bowl.

Chop cilantro and mince garlic and add to seasonings. Set aside.

Turn about every 5 minutes or so … keep an eye so as not to burn it, but some corn kernels may darken. After all of the corn is cooked, remove from heat. Depending upon the heat of your grill, this could be 10 to 15 minutes.

Serve with other Mexican dishes as a side dish or as an appetizer with tortilla chips or vegetable strips to dip into salsas and guacamole.